My goal today was mostly to stay out of trouble on contract rollover day, and to get into a rhythm with my trading, i.e. get comfortable entering/exiting trades on the Live account. I may have over-done it, but I placed 27 trades today (6 on the ES and 21 scalps on the NQ). I don't usually trade the NQ but I keep a 5-min chart of NQ up to get a feel for sector participation on big moves. For example, ES was trading above it's 1st hour high in the afternoon session while NQ was trading below it's 1st hour high. I began scalping the NQ just to get comfortable entering/exiting the market, and the NQ doesn't really do much damage since it's a smaller contract. I ended positive on the NQ and ES but broke even on the day after commissions.

Some positive points from today:
1. I'm slowly getting a little better at executing trades with less hesitation. Still a looong way to go!
2. I added to a winning position in the NQ.
3. I was down $140 or so in the early afternoon and could have called it a day, but continued pressing on and made back the loss.

The main negative point from today was that I didn't hold on to my winners. I was short in NQ from 1503-1507 several times but after a few 2.5pt stop-outs, I got a little shy and started taking quick winners to get back to positive territory. I was short in the ES at 844.50 and 845ish late afternoon but didn't hold it long enough because I was afraid they would run it back up like they did yesterday. Considering ES was above it's 1st hour high till 2:25 PM (central), there was a chance that price could rally back into the close. It also bounced off the 945 area so many times.

Overall, I'm still down $267.50 on the week. I have to run some errands tomorrow so will only be trading the first couple of hours. 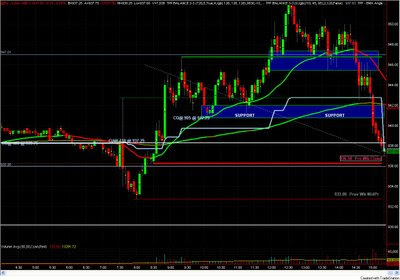 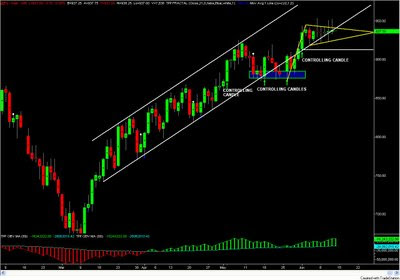