I switched over to the Live/Real $ account yesterday. No matter how much time you've spent on the Sim, the transition to the Real $ account always brings about some psychological hurdles that one has to work through. That may not be the case with a new trader who starts on Sim, and then switches over to real $, but for someone who's made hundreds of trades with dollars on the line (me), it brings back some old memories and fears. I traded piss poor yesterday placing 3 scalp trades for +1 tick each because for some weird psychological reason, I really wanted my first day on Live trading to be positive.

After realizing that this was a big problem, I looked back at my journal from late 2003 and noticed that "early exits" were a problem even back then. To help solve the problem, I figured I would be more patient and give my trades time to work. Problem is, when you're entering fundamentally bad trades, the additional time only works against you. And that's what happened today. I gave my trades time to work; and that resulted in me taking full stop-outs on almost ALL of my trades today (-1.5 pts per trade). Ironically, I gave all the losers time to work, while cutting the good trades short at break-even. 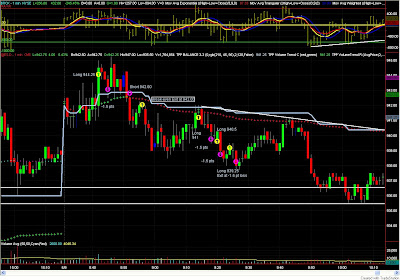 I went Long in the morning after it looked like price wasn't going for gap fill and was stopped out for -1.5 pts. After seeing the momentum shift to the downside, I entered short at 942.00 except this time, I was quick to move my stop-loss to break-even, so I got stopped out at break-even on a good entry. After that, the gap filled, and I figured we were ready to resume the up move and began hitting it Long and giving it time (to hit my stop-loss). The three Long trades that followed were fundamentally poor trades from the get go, and didn't even go with my method. I guess those could be classified as "revenge" trades :-/ After being down -5.75 pts, I figured it was best that I stop and come back in the PM session. 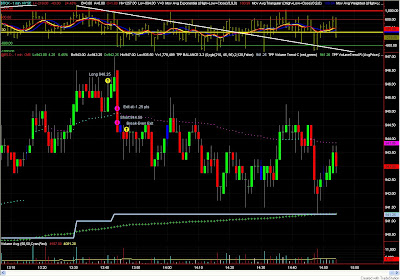 My friend who I'm teaching was sitting right next to me, trading his own real $ account, and he entered Long at 945.50 area on the break-out of the first hour high. I told him that 946.50 was resistance from yesterday's high so it's probably best that he stay out until we get a confirmed break-out above that area, and then he can enter Long on a pullback. It'd be sweet if I followed that advice myself. Instead, I got caught up in the price action, and hit it Long at 946.25 and was stopped out a minute later. I then immediately entered short at 944.50. That trade went a point or so in favor and then retraced back up...I had already moved my stop-loss to break-even and missed the down-side action that followed.

So to summarize, I traded like an idiot today and did the complete opposite of what I should have been doing. I held the losers and cut winners at break-even. Now I can either beat myself up over an almost $400 loss, or I can try to learn from my mistakes and make a better effort later in the week. I'll go with the latter. Plus, no one day should make/break a trader. I'm just glad I didn't do too much damage.

Any comments/advice appreciated. I'm not posting the stats because they're obvious from the trade chart (5 losers, 2 scratch trades, -7 pts). 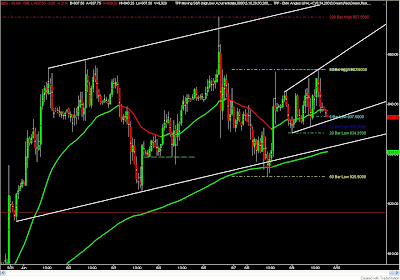