If you've been following the blog for even a couple of weeks, you already know Mondays are bad for trading since my day is jam packed with meetings, and due to the busy schedule, I won't take any live (real $) trades. Instead I fired up Trade Station, and pulled up the 1-min chart with the NSYE TICK, VIX and ES. I took 4 sim trades by glancing over at the 1 min chart in between meetings, and used nothing but this relatively simple 1-min chart. Trading 1 contract, the net profit on the day stands at +$177.90 with 4 winners and no losers. The average holding time for each trade was 5-minutes. Not too bad considering the trades were taken with quick glances over at the simple 1-min TICK/VIX/ES chart. The max stop used on the setups was 8 ticks; with a couple of trades using a 5-tick stop-loss.

Here's a marked up screen shot from the morning, showing a short setup around 9:50 AM central time. This was taken in real-time. 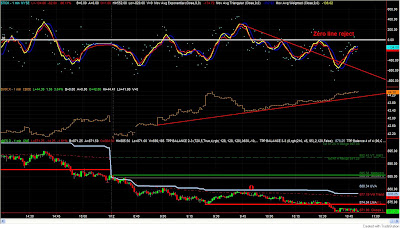 Another marked up screen shot from later in the day.

Final screen shot from the afternoon showing, both, a Long and Short setup. The morning premise of "Short TICK Ceiling/Top" remained in effect and I was able to scalp 1 point to the down-side as well.