I watched/traded the 1-min ES/TICK/VIX chart again today (on SIM), and considering how choppy and range-bound ES was most of the day, and my schedule at work, the method performed great with a net gain of +$627.00 on 1-2 contracts with a 50% win rate. The win rate would have been higher but I was unable to manage the trades due to my schedule, so simply set OCO bracket orders for stop/target and let it hit one or the other. Majority of the losing trades first went into positive territory by 2-3 points before reversing; those losses could have been salvaged for at least break-even trades pushing the net gain to over $1,000. I tried to take screen captures throughout the day, and will post them along with a brief commentary to explain the setups. They're pretty straight forward and obvious; in my opinion. On to the charts...

10:00 AM Central
Price made a higher high at 9:16 AM; while the TICK made a lower high signaling a TICK Divergence Short setup. TICK was also unable to break through the TICK Ceiling/Top put in place yesterday, so the premise of "Short Rejections of TICK Ceiling" remained in effect. Even if you got in a bit late, and shorted this at 870; an easy cover of 866 for +4 points was definitely do-able (865.70 was the Lower Value Area). 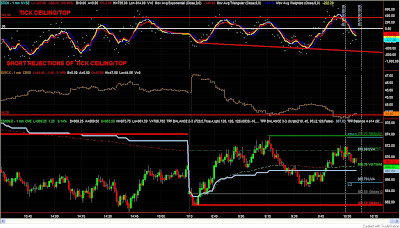 10:17 AM
The same setup as before can be seen at 10:11 AM. Double-top on price, with a lower high on TICK signaling a TICK divergence short sell setup. 871 was also the Upper Value Area (resistance), and a good place to short, but lets say you were again a bit late and shorted at 870, the trade could have been exited at 866-867 for +3-4 points. The other thing to notice here is that the method does not require wide stops. 2 point stops work just fine. 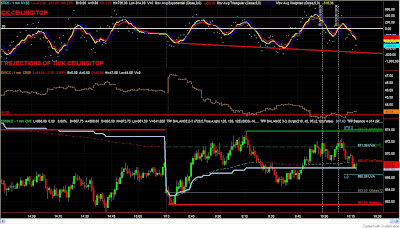 10:30 AM
Since I was only looking for shorts, I did not take any trade setup in this screen shot but do want to point out that 865.90 was the Lower Value Area and both, price and TICK, made a higher low. 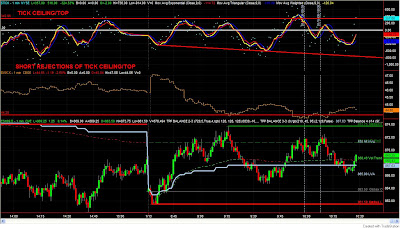 10:45 AM
OK, this one is classic. Several reasons to short up here. TICK divergence; rejection of TICK Ceiling, double-top, and 1st Hour High! This one is a no-brainer. Lets say that wasn't enough, and you wanted to be patient and wait for confirmation from price action; the bearish engulfing at 10:45 AM triggered a short entry at 871. This one is a small scalp but still good for providing a 1:1 risk/reward ratio. In this example, we'll take an hypothetical exit at 870 for only +2 points+1 point since getting out swing low is not realistic. 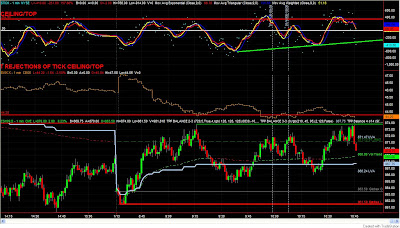 11:06 AM
This is a nice screen shot since it shows that the TICK can also be used to avoid chop. You'll notice that the prior swings on the TICK were directional; whereas at this time the TICK moving averages are just chopping in a narrow range. This is where I just stayed out and avoided the chop, and waited for a clear directional move.

11:30 AM
We get some directional movement here, and TICK breaks below the zero line. If you were quick, you might have been able to scalp a point or two, but I stayed out. It's very close to the mid-point 867.75 and I didn't see enough of a risk/reward to take a trade at that point. 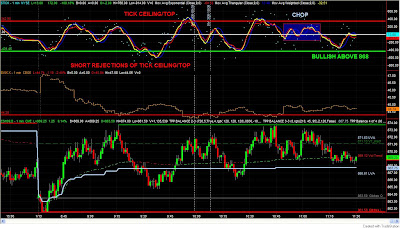 12:00 PM
This setup at 11:57 was much better but instead of TICK divergence, we saw TICK confirmation. Lower high on price, and lower high on TICK. Short 869. You could cover at 867 for +2 points (866.71 is Lower Value Area). or if you were patient, you could have monitored price action at the mid-point. Looking back at the charts, I see a lot of indecision at the mid-point and if you held out, ES dropped down to 863.25; so in that case you could have exited at at least 865 for another +2 points (+4 points total). 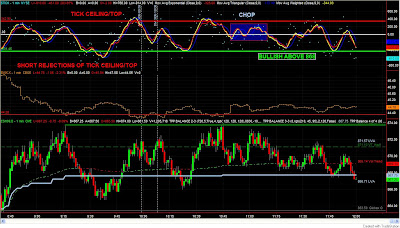 12:50 PM
This one is very interesting since I saw it as signaling the bottom of this down move. TICK made a higher high and is on pace to putting in a higher low, while price made a lower low. I started watching for Long setups at this point. 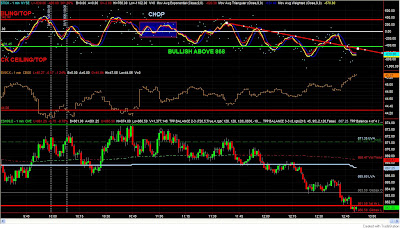 1:04 PM
Again we see that TICK has, more or less, bottomed out and is making higher lows. Actively looking for Long setups now. 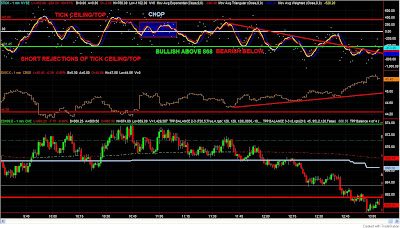 1:25 PM
Same as prior shot; TICK makes a higher high; price does not. Still looking for Long setups. 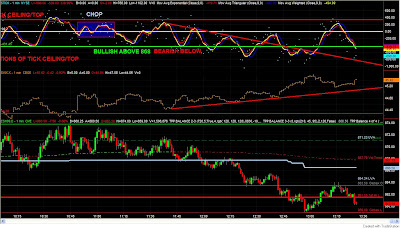 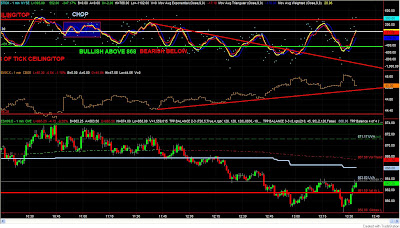 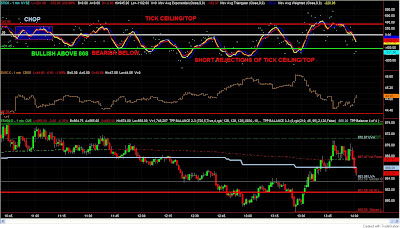 2:10 PM
In this shot, we see that ES broke down through the mid-point at 866 and tested the Globex Open around 863, and then broke through that area and tested the 1st Hour Low. I'm again thinking back to my earlier short which would have been good for +9 points if I had been patient and held on. 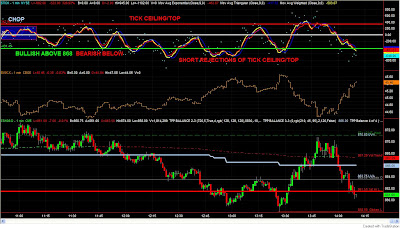 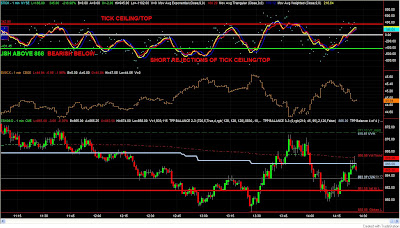 2:31 PM
Mid-point is being tested but I don't see any clear setup here. That bearish engulfing candle just looks like a stop-run to me. But who knows... 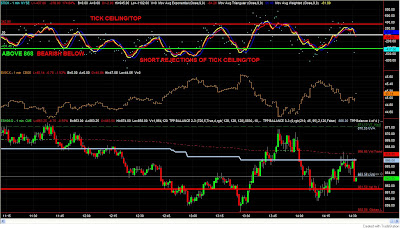 3:00 PM
I guess that was a stop-run after all. Quick re-test of 1st hour low, and then back up again in a matter of minutes. This was too quick a move for me to capitalize on, but if you were glued to the screens, you might have been able to eek out a few points here as well. TICK divergence is signaling long here. 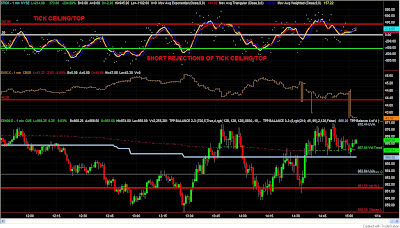 Well, that's it folks. All in all, this method worked great today and would have netted over 20 points ($1,000) per contract. I was trading this in real-time, but that was while I was working, running to meetings, replying to emails, taking phone calls, etc. so my execution was crap. Despite all of those issues, I ended the day up $627 net, with a 50% hit rate! Imagine what you could do pairing this method with your existing filters, and trading it with your full focus, attention, and time.