Started a bit late on Friday morning due to the economic data being released in the morning. It's safer to let the market digest the data, and then enter trades based on some fresh support/resistance levels. I essentially had two trading ideas/sequences on Friday. The first trade was entering Long at the 857 area with an expected initial target of 860.75. That worked out OK for me and then I sat on my hands for the next move. The next area in-play was 860-865.25. My plan was to short a break of 860 (I had a sell stop order in at 859.75) or to buy a break-out of 865.25 with a 3-4 point target in either scenario. I was aware that some "stress-test" related news was going to be out at 1:00 PM (central), and based on price action (trend was up), I was long at 861 with a reversal-stop at 859.75. Seemed like a safe play at the time. Once the news came out, I got stopped out of my Long position, and entered into a Short position, but the move came in so fats & furious, that my short position got stopped out for a 2 point loss on that swing up. I entered long again expecting the up-side to continue since we were in an up-trend prior to the news. But, I got stopped out yet again, so I again, entered short around 860 and exited around 855 (853 was a support level). I ended my trading day there at 1:15 PM (central) with a net gain of +$425.10 with a win rate of 38.4% and an average profit factor of 1.64 (the profit factor on my short trades was 8.85!). I could have certainly handled the situation better by NOT entering Long simply because price reversed after that break of 860. That would have saved me a few hundred in losses. The better play would have been to remain flat into the news, and then enter short on break of 860 with a tight stop or enter long on a break-out of 865.25. Lesson learned! Here's a snapshot of my 610 Tick bar chart from Friday. It should give you an idea of what I look for, and how I read price action: 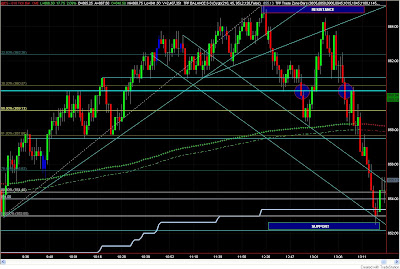 Looking at this past week's results in TradeStation, my net gain on the week was +$897.40 with a win rate of 39% and an average profit factor of 1.53. This number doesn't include the gains from Tuesday, when I was experiencing technical problems with TradeStation (caused unnecessary losses), and used the Infinity AT trading platform. If I count those trades, the weekly gain would probably be around +$1,600.

On to the regular charts... 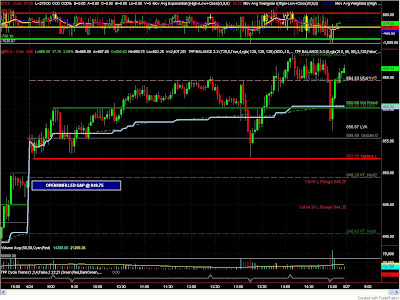 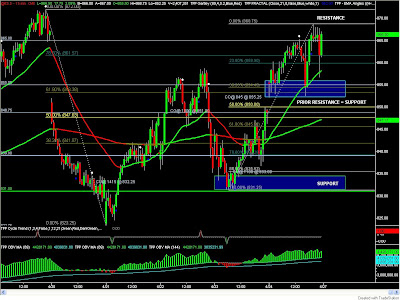