I used the Infinity AT platform for my trades today so I won't be posting the usual TradeStation trade execution chart. I manually marked some of the morning trades, and will post that chart below. The net gain on the day was +$300, mostly due to a Long entry at 858 off a pullback, which netted +5 points. I was trading 1 to 2 contracts today; although majority of the trades were with a 1-lot. The net gain would have been higher but I tried trading the open, and lost some money during that time period. I was long at 851.50 right off the open, but was too quick to move my stop-loss to break-even! I'm not used to trading the open and need to adjust my risk management to handle the volatility during the opening range. Of course I always have the option to just sit out during that time, but some of the best entries over the past few days have been very close to the open. Plus, I was expecting gap-fill, so wanted to enter Long at the best available price. I also had limited screen time since I was on the phone with recruiters, etc. Here's a 610 tick bar chart showing a few of the morning trades; there were a couple of losers during the opening range which aren't marked on the chart. 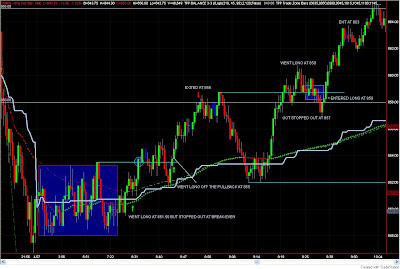 My friend who's learning how to trade the ES, ended the day with a net gain of +$350, and his trades were all based on the simple price action method I taught him last week. I'll keep you guys posted on his progress over the coming days/weeks.

Redbook out at 7:55 AM (central) and Consumer Confidence at 9:00 AM (central) tomorrow morning. I'll probably sit out the first hour. Trend is down at the moment; lets see if tomorrow's data can shake things up :-)


ES/$TICK (3-Min) - Came within 3 ticks of gap-fill; close enough to be considered filled. 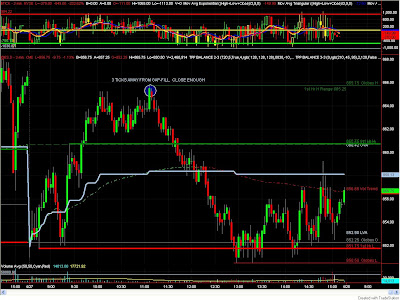