My head definitely wasn't in the right place today, and that's reflected in today's net loss of -$1297.50; worst single-day loss to date with only 12% of the trades being profitable. So, what happened? Well, a few problems:
1. Had a dentist appt, and jumped the gun on shorting this morning. I was expecting a drop to the 836 area, which happened while I was at my dentist's office. The morning trades resulted in roughly a $400 loss.
2. Ignored price action in the ES, and put too much faith in inter-market analysis. NQ was showing weakness, and a lot of times, NQ can be used as a leading indicator, but not today. Price action trumps ALL indicators, and I should have paid more attention to price action instead of taking trades off weakness in NQ and the energy sector.
3. Traded 2 contracts at times, which helped magnify the loss.
4. Tried making back the loss even though I should have just closed down for the day.
5. Had other distractions throughout the day (calls from recruiters, etc)
6. My bias to the down-side was too strong today. I had 1 Long trade (profitable), and 24 Short trades, and only 2 of those were profitable. Instead of trading from the perspective of "I don't know what's going to happen next"; I was trading with the thought "This thing's DEFINITELY going down!". I'll pay more attention to my thoughts going forward, and will proceed with caution when I'm 100% sure about direction, because you can never really be 100% sure price will go up/down.

And this is why I'm still on Sim. I'd rather learn (re-learn?) these basic lessons without paying up. Going forward, I think I'll put a $750 loss limit in place and just stay out of trades all together if I'm on the phone, or have an appt.

I'm not sure where this market is headed. We've gapped down two days in a row, and the gaps have been filled both times, which is a bullish indication. Price has held the 200 EMA on the 15-min chart, which is also a good sign for bulls, but I feel like this up move is running out of steam, and we may see that open gap at 822.75 get filled. I know I shouldn't really spend too much time predicting where price is going and just trade in the moment. 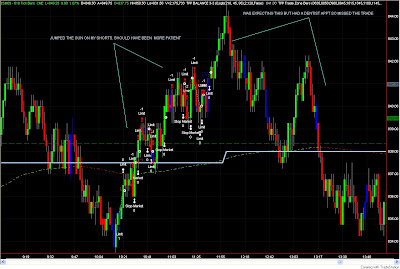 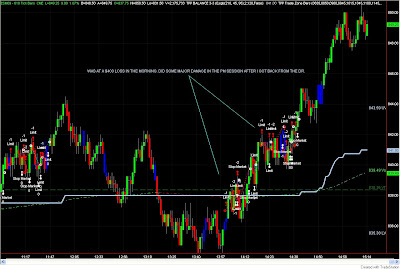 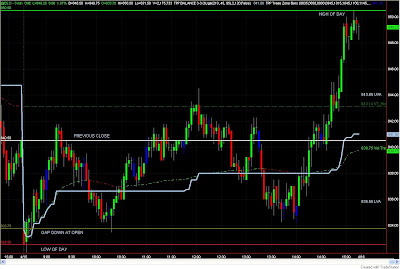 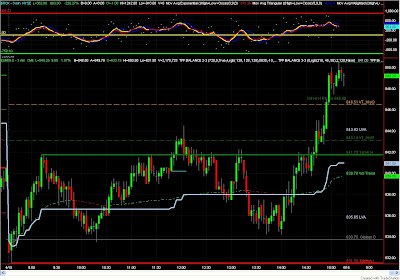 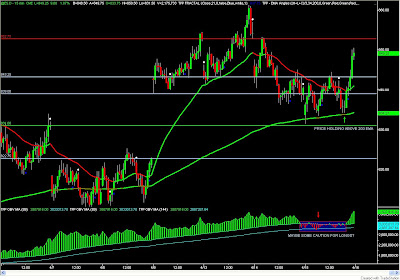