I won't bore you with the excuses (although I have a few), bottom line is, I didn't adjust to the market's pace (or lack of), and got chopped. There just wasn't any follow through on the moves today; my trades would go 1-2 points in favor, but my targets were usually 3-4 points and I would try to be patient and hold out for target, and instead get hit with a loss since price would reverse hard! I had 25 trades today (32% win rate) with 3 Longs (all losers), and 22 shorts (36% win rate) and ended the day with a net loss of -$310 ($157.20 lost on the 3 Longs, and $152.80 lost on 22 shorts). At least I kept it tight. I made several mistakes. First mistake was trading while I was mentally frustrated and physically occupied with non-market related issues, and not "in the zone". Second, I got sucked into trading the afternoon range-bound chop, and reversed my position several times which resulted in several small losses. I should have just waited it out, but I really thought the market was going to drop to at least the 851 area, and wanted to be positioned short into the drop. After I was down over $300, I decided to call it quits, and of course we got the break-down in ES right after I quit for the day (so frustrating!). And that brings me to an important question: Should I impose a loss-limit while I'm on the Sim? I would definitely have a loss limit on the real $ account, and it makes sense to treat the Sim trading as close to real $ trading as I possibly can. But on the other hand, I miss out on additional screen/trade time if I quit early in the day. Post your thoughts in the comments.

An update on my friend; he netted +$55 or so today after commission. Not bad at all considering the price action. 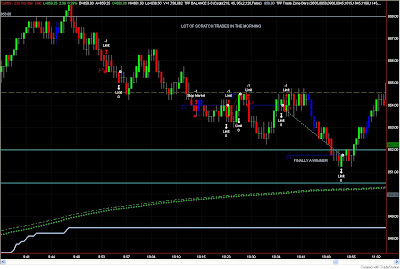 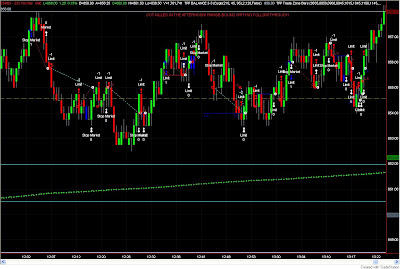 ES/$TICK (3-Min) - TICK MAs were hovering around the zero-line most of the day; indicative of the indecisive market action today. We got the gap-fill at 9:42 AM (central)