I'm still waiting for that one day when I'll have no distractions or technical problems throughout the trading day, and I'll be able to focus on just the market. I got up pretty early this morning to head to the condo (as mentioned in yesterday's post), and a few minutes after I left, I got a call from my contractor saying he will need to reschedule due to weather (did I mention how glad I am to NOT be in the construction business). I was actually glad since I could now spend the day trading. I was at the screens at 8:15 AM, and started placing trades around 8:40 AM. Unfortunately, TradeStation started having problems right from the open. Charts froze for a few minutes at the open. Then later on, I lost my tick-bar charts altogether. After that, the NYSE TICK data froze up. Then I lost data on XLF, the financial ETF. In the middle of all this, I received 7-8 phone calls regarding a property I'm selling, which is a good thing for the property sale, but a huge distraction for trading. So basically just problem after problem, and an extremely frustrating day. I was trading just off the 1 and 3 minute charts, and was up +$187.50 in the morning; missed a lot of trades, and took some bad ones since I didn't have the 610 tick chart, which is my primary execution chart. I kicked up the size a bit in the PM session and began trading 1-3 contracts. Ended the day up +$1,100 but I'm not really counting it since it wasn't on my typical 1-lot trade size. For the record, I hate trading 1-lots but I have to prove I can be profitable on 1 contract before I increase size (have traded up to 12 contracts in my real $ account in the past, but want to "earn" the size this time around).

As the title suggests, I lost discipline and got caught up in the action on the DOM (depth of market), and began scalping for quick 1-2 pt profits; at times just 2-3 ticks of profits. Perhaps this was because my charts were barely functioning today, or maybe I just got caught up in price moving so quickly on the price ladder (Infinity's platform is super fast!), and started going for quick momentum trades. I don't know. Whatever the reason, it's not how I normally trade, and despite the gain today, I would grade my trading as a "C-" since I didn't stick to my plan in the afternoon, cut too many winners short, and scalped way too much (40+ trades today).

As of now, looks like I'll be at the condo tomorrow morning at 8:30 AM, unless it rains again, so no trading for tomorrow. A one-day break is probably a good thing on this end. 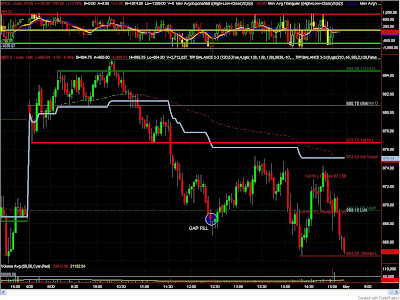