I went to bed around 2:30 AM last night, and slept in till 9:30 AM this morning. I got to the screens around 10:30 AM (central), and saw that price had bounced off 882, an area that I marked as support yesterday. I utilized just the 5-minute chart for trade placement today, and my focus was to experiment with my stop-loss management. I decided I would let the trade run and move my stop-loss to break-even once price had moved 2 points in my favor. My initial profit target was 4 points (1:2 R/R). I had a total of 3 trades.

Trade#1
I entered Long around 10:55 AM at 890.50 with a 2-pt stop and an initial 4-pt profit target. Once price moved 2 pts in my favor, I moved my stop-loss to break-even. Price then went 3 pts in my favor, at which point, it looked like I should exit the trade but I had to stick with the 4 pt target for this experiment's sake, and was exited at break-even around 11:25 AM (central).

Trade #2
I entered Long around 11:30 AM at 890, again with a 2 pt stop and 4 pt profit target. Once price moved 2 pts in favor, I moved the stop-loss to break-even. Price then continued and was +3.75 pts in my favor, a mere 1 tick away from my exit order. The 12:10 PM (central) candlestick signaled a reversal and I could have bailed for +3 points, but I stuck with the experiment and once again was stopped out at break-even at 12:35 PM. 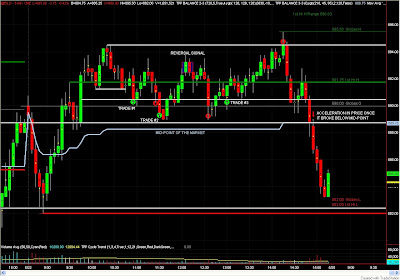 I realize one day's price action doesn't say much, but it looks like I need to give my trades some room in the beginning. Moving stop-loss to break-even at +2 pts sounds reasonable from a risk management perspective. But then if I see a reversal signal, I also need to go ahead and exit at a profit. I easily left 3 pts on the table on my first two trades, so this could actually have been a +10 pt day in just 3 trades if I used discretion and exited the first two trades at a profit. Here's the Stats break-down:

ES (Daily) - Zoomed In. Price made a lower high and higher low today. 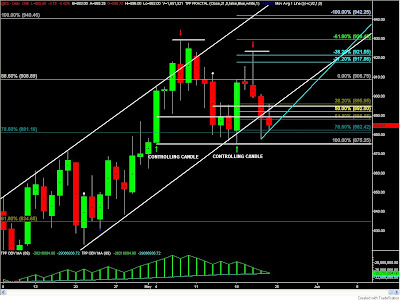 Email ThisBlogThis!Share to TwitterShare to FacebookShare to Pinterest
Labels: Before Holiday, Friday, gain, May, stops, trades