Execution is key. Simply "knowing" what to do is not enough. For example, I've been anticipating the 876 level to serve as support and noted the following in Friday's post: "Price still within bullish channel, and 876 low from 05/04/09 was held today." I also recognized that the trend was clearly up today, and that I should be buying the dips, yet when it came time to execute, I continued entering short positions all day, which resulted in a -5.50 pt loss. I was confused with the price action for better part of the day since price would shoot up, and then consolidate for what seemed like an eternity. Most of my break-even trades went 5-7 ticks in my favor but I tried being patient and holding for larger gains, but that didn't work out for me. I realized I was taking counter-trend trades, and that I should just bail for +6 ticks but again, even though I knew what I "should" be doing, I failed to act on the information and continued holding for larger gains which never materialized. Not much else to say except I'll try to do better tomorrow. Stats: 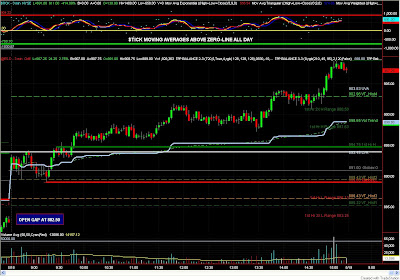 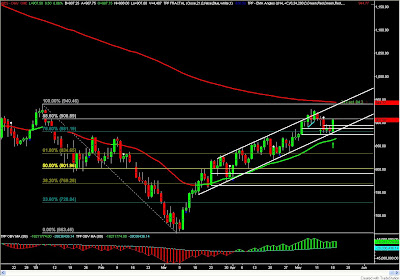