The good news is my job interview from the other day went well and I have an offer on the table. The bad news is, taking this job would force me to take a break from trading. I would still continue following the markets, and mark up the charts every evening, but obviously, I wouldn't be able to trade the market in real-time. On the bright side, it's a contract position so I could come back to trading in 6 months (if I don't renew my contract). I view trading as a long-term career option and not a get-rich-quick scheme, and at this point, it makes sense to take the job, reduce/eliminate liabilities to the point where I can take at least one year off and dedicate that time to trading the markets. Most businesses fail due to lack of capital, and I don't want that to be the case with my trading (business). On the plus side, the project I'll be working on sounds pretty cool and it's for a very large company which would look good on the resume. This isn't an easy decision for me since I really want to trade full-time.

With that out of the way, on to today's results. I mainly traded the morning and had some sweet short entries at 892.25 and 892 but was too quick to move my stop-loss to break-even, so both of those shorts were scratched. I re-shorted at 889.50 but covered too soon at 887.50. Scalped it short again for a few ticks. My biggest problem at this point is patience. I'm not patient with my winners or losers; I cut my winners quickly, and my losers even more quickly which is probably why I'm still net positive, but I'm not taking full advantage of my entries. The entries are good for 3, 5, 8 points per trade and I'm usually exiting with just 1-2 pts, which is disappointing to say the least. It's a personal/psychological problem. I just hate losing, and try too hard to keep my losses to a bare minimum, which results in missing out on potential gains. So the question is, are my early exits saving me enough money on my losing trades to make up for the lost gains on the winning setups? One solution is to use a "set it and forget it" trade management approach, where I would enter a trade with a preset stop-loss and profit target and let the market hit one of those orders instead of manually exiting the trade. I could also systematically move my stop-loss to break-even; for example stop gets moved to break-even once the trade goes 2 pts in my favor, etc. That way it's not purely discretionary. I'll have next week to experiment with these ideas. If you guys have any ideas, please post them in the Comments section. Here's how today's Stats broke down:


There was plenty of Daily support in the 875-880 area, which provided a nice bounce into the close. On the Daily chart, today marked a lower high and lower low, but keep in mind we need to see a series of lower highs and lower lows in order to accept a possible trend reversal. The way I see it, today's bearish price action was still contained within the bullish Daily candle from 5/18/09. Price tested the lower price area but rejected it, and Closed at 888.75, and the Close is much more important than the Low. A Close below 876 would suggest a major turn in the markets. In support of the bears, Price broke below the bullish channel; not sure how big of a deal that is though since the channel was hand drawn by yours truly :D All that being said, as traders, we need to approach each day with No Bias...easier said than done.

Markets close early tomorrow; expecting a low volume day. Might be best to sleep in :-) Enjoy the long weekend all! 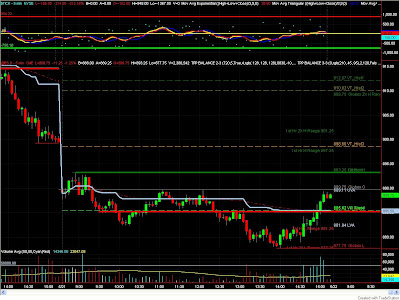 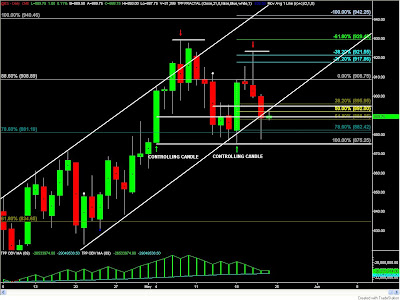