Today was a very frustrating trading day. I switched to the real $ account today, and ended up with a net loss of $194.20. The dollar amount doesn't bother me; not really a big deal, but the way it all unfolded does. And I'm not blaming the market; and take 100% accountability for my lack of performance. In the afternoon, I noticed a divergence in momentum and price, as well as volume and price. The volume oscillator indicated that traders were selling into the up moves above 901. Here's a snapshot of the "Trades" window from the IB platform:

I got stopped out for -3 points on the first 901.75 short.
I re-shorted 904.50 and took a 2.75 pt gain at 901.75
I then shorted 903 with a stop at 906. I was on the phone with a friend, and I actually meant to add to my short at 904 but accidentally sent in a buy to cover order for a -1 pt loss. At this point, I'm still on the phone and
I re-shorted 903.50 and got stopped out at 905.75 for a 2.25 pt loss. I was still on the phone so decided to step away and just call it a day. And what do you know, we get one last run on the stops, and then ES tanks 14 points. THAT is what I was expecting and looking to capture ALL afternoon! All of my trades went into positive territory by 1-2 points before reversing on me, but I was forcing myself to be patient and not take an early exit. The way price was setting up, I was looking for a 5-8 pt down move at the minimum. There was also strong divergence between the indexes. NQ broke down, while ES broke out. Today's loss was due to a sheer lack of discipline on my end. Going forward, No Phone Calls while I'm trading.

I'll be switching to all real $ trades in 2009. I'll be working on setting some trading goals over the weekend, along with some money management rules. I'll be posting all my real $ live trades here for full accountability. My starting balance will be $22,648.

Wish everyone a safe and successful 2009!

Breakout from Symmetrical Triangle on the Daily 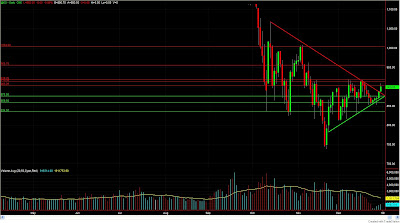 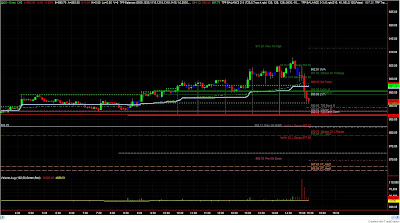