Last week's run up in the markets didn't make any sense to me but I've been working on NOT having a bias, and just trading the current price action. I was anticipating resistance in the 900 area on the ES, and very strong resistance in the 920s. Sadly, I was unable to capitalize on the idea. Chicago got its first snow last night, and it has been snowing most of the day today so the morning commute was a pain. Traffic was terrible and the trains were delayed. Monday's are also bad due to several meetings throughout the day. Considering the circumstances, I should've just taken the day off from trading all together. Instead, I ended up putting on some counter-trend trades to scalp for 1-2 pts per. Ended the day with a net gain of $66.40 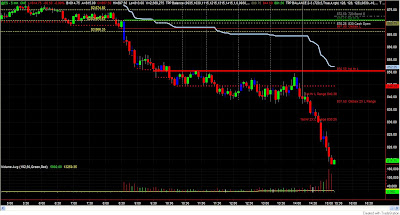