I was up late last night busy with IT work (my real job) so slept in this morning and wasn't planning on trading at all. The up move after the Fed's announcement really extended the price out, and I started looking for mean reversion trades. I could have fine-tuned my entry but instead chose to experiment with the scale-in/scale-out approach again, which I said yesterday only works when the market is over extended. I shorted with an average price of 907.75. Due to some tech issues with my broker (IB), my exit orders at 904.75 did not get filled. I was stuck with holding the position into the next session, which was not so bad considering how extended the price move was, and the overhead resistance in the 918 area (previous week's high). I just covered my position at 901.75 for +6 points. Enough experimentation; starting tomorrow it's back to the game plan (fine-tuned entries and tight stops). I would also like to start taking screen shots of each trade setup, both for entries and exits, so I can review and post each trade with accompanying charts. We'll see. That may be a bit over ambitious, but I'll give it a shot. 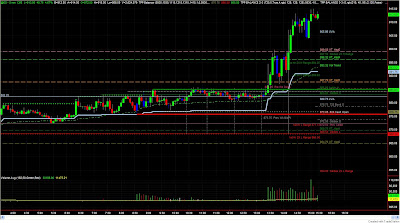