I'm being selective on my trades lately. Entry was OK on the first trade this morning, but exited way too early with only 1 point; left 5-6 points on the table. I tried to correct this problem on the second trade and ended up taking 1.5 pts on the first contract, and held the other for a 4 point target. Price went 3.5 points in my favor, and then reversed and stopped me out at +1 tick profit. I should've covered on the hammer candle on the 1 min but price was moving very quickly, and I was at work and couldn't monitor the charts throughout the trade. The 869 area was clearly acting as resistance, and I saw the setup, but was busy with work so didn't put on any trades in the afternoon. For some reason, I'm very hesitant to put on positions lately. You might laugh and say "dude, it's on SIM!", but keep in mind, I try my best to treat this as real money. I don't want to be too quick to jump on a trade, but the hesitation in putting on a position is resulting in missed entries. Once I miss the entry, I don't chase the trade so I end up missing the entire move altogether. This is a work in progress, and considering I only spend 30-45 minutes concentrating on the markets, it only makes sense that my learning curve is going to be more steep than someone doing this fulltime. Anyway, today's result is a very modest gain of $123. 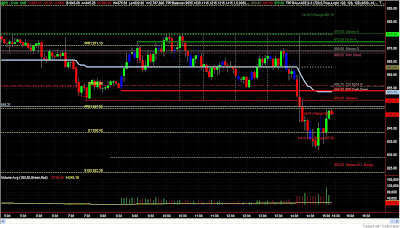