I took one trade on the ES this morning, and it was a scratch. I was watching ES, YM, NQ, XLF (financial sector ETF), and XLE (energy sector ETF) and noticed weakness in all but the NQ. NQ was definitely the strongest one of the bunch this morning, but big drops in the other indices indicated that there would be at least a small pullback in the NQ. I missed the ideal short entry on the ES, so instead shorted the NQ. I scaled in/out of the position fairly quickly since it was a counter-trend play, and I realized I was shorting the strongest index at the time. Once NQ started moving back up, I saw it as an indication that the others may soon follow and had an opportunity to enter long on the ES around 899, but was close to my stop in downtown Chicago so took a pass on that trade. That trade idea would've resulted in a 10+ point trade. Intermarket analysis is one of the keys to profitably trading the e-mini index futures (ES, NQ, YM). Ended the morning train ride with a +$342 gain. I was busy with work the remainder of the day so couldn't put on additional trades. I saw a short developing but missed the ideal entry so passed on the setup. I'm trying to be more disciplined with my entries since my stops are fairly tight now. 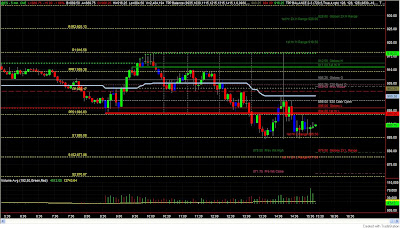