In hindsight, almost every trading day looks like it was such a piece of cake to trade, when we all know, things are very different in real-time. In real-time, today was a shitty day; plain and simple. Lot of chop and two-sided trades; lack of momentum, lack of continuation on trend moves, and just overall a bad environment for MY style of trading.

I was up till around 2 AM last night working on non-market stuff, and I know I can't trade while I'm sleepy, so decided to sleep in. I got to my screens around 11 AM, and there wasn't much going on, so scalped it short and then long for +2 pts. I should've held the long trade since price was finding some support around the 808 area (I was long from 809), but at the time, market was looking weak, so I bailed for a point. After I exited, price shot up 3-5 points in a hurry, at which point the risk/reward just wasn't there for me to buy, and I wanted some further confirmation before entering the market again. This brings us to the afternoon trades. Price couldn't reach yesterday's high, which was a warning sign that bulls were losing momentum, but I didn't want to enter short either since price had made a higher high, so I just sat it out. Then price started breaking down, and I entered short and was stopped out for 3 ticks. I got chopped up a bit trying to figure out the direction the market wanted to go, and it was quite frustrating. The market finally showed its hand around 2 PM when it broke the mid-point, but I wasn't at my desk to do anything about it. I had to step away, and told Matt via Yahoo IM that now that I was out of my short, ES would probably tank. and that's exactly what happened. I was a bit paranoid from the lack of follow through I experienced earlier so just took one more quick scalp to the short side when I got back. I had a feeling we would break the 1st hour low since they couldn't even push price back up to the mid-point, but I was unable to capitalize on the idea. 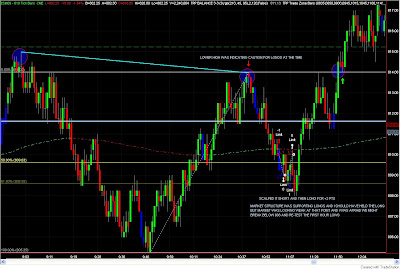 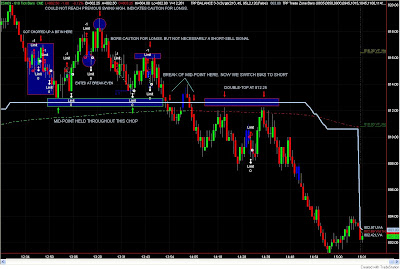 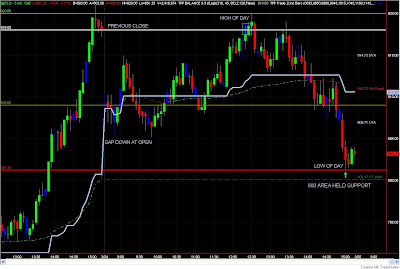 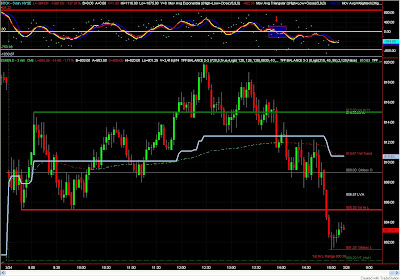 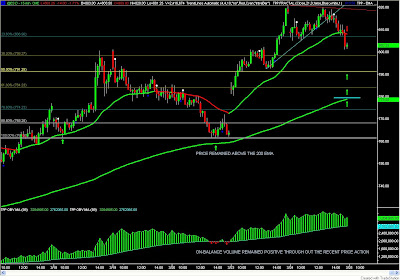